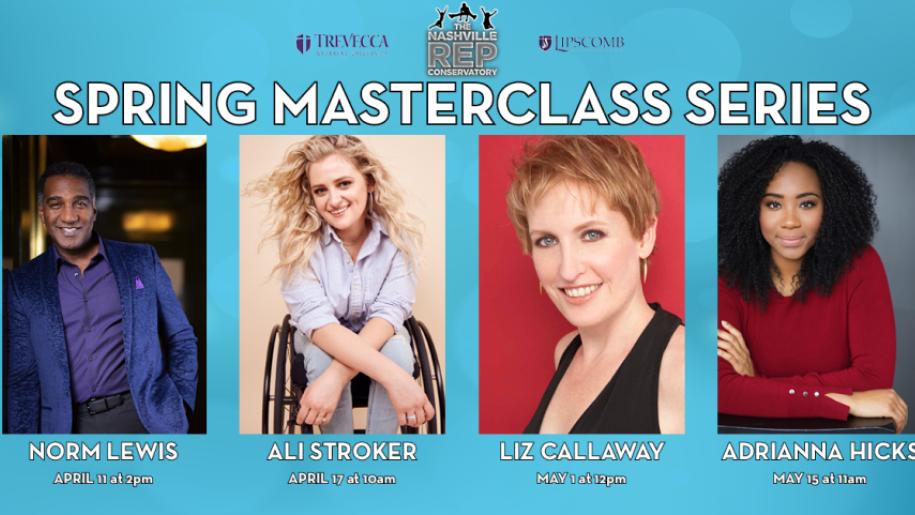 Nashville Repertory Theatre’s education program, the Rep Conservatory, will host four masterclasses with Broadway performers this spring! The series will include classes from Norm Lewis, Ali Stroker, Liz Callaway, and Adrianna Hicks. Auditions for all four classes are currently open! High school and college-aged students are invited to submit for any and all of the masterclasses in this series. For more information, visit NashvilleRep.org or follow along on Nashville Rep’s social media.

Nashville Rep is partnering with local universities to host the classes. Norm Lewis and Ali Stroker will be hosted in partnership with Trevecca Nazarene University, and Liz Callaway and Adrianna Hicks will be hosted in partnership with Lipscomb University. Students will attend in person while celebrity instructors attend via Zoom. Safety is the top priority for the Rep and partnering universities, and all masterclasses will follow university and Metro Nashville COVID-19 guidelines to ensure students and accompanists are protected.

“Nashville Rep is thrilled to continue to be able to bring together some of Broadway’s brightest talents with some of Nashville’s most promising young theatre artists, even during the pandemic,” said Drew Ogle, Nashville Rep’s Executive Director, “We are so appreciative to Norm, Ali, Liz, and Adrianna for joining our program, and we are grateful for the partnerships with Trevecca Nazarene University and Lipscomb University. Their support is allowing us, though technology, to emulate the high level, in-person learning experience for our students.”

Norm Lewis’ masterclass will be held at Trevecca Nazarene University on Sunday, April 11 at 2pm central. Norm Lewis can currently be seen starring in the SAG, Critics Choice, and NAACP Image Award-nominated Netflix film “Da 5 Bloods” by Spike Lee and in the Hulu miniseries, Mrs. America. He was previously seen in the NBC television special, “Jesus Christ Superstar Live in Concert!,” alongside John Legend, Sara Bareilles, and Alice Cooper. He recently appeared in the Broadway revival of Once on This Island and as Sweeney Todd in the Off-Broadway production of Sweeney Todd: The Demon Barber of Fleet Street at the Barrow Street Theatre, receiving the AUDELCO Award for his performance. In May of 2014, he made history as The Phantom of the Opera’s first African American Phantom on Broadway. He has been seen on PBS in the Live From Lincoln Center productions of Showboat with Vanessa Williams, Norm Lewis: Who Am I?, and New Year’s Eve: A Gershwin Celebration with Diane Reeves, as well as American Voices with Renée Fleming and the PBS Special First You Dream – The Music of Kander & Ebb. Mr. Lewis is a proud founding member of Black Theatre United, an organization which stands together to help protect Black people, Black talent and Black lives of all shapes and orientations in theatre and communities across the country. He received Tony, Drama Desk, Drama League, and Outer Critics Circle award nominations for his performance as Porgy in the Broadway production of The Gershwins’ Porgy & Bess.

Ali Stroker’s masterclass will be held at Trevecca Nazarene University on Saturday, April 17 at 10am Central. Ali Stroker won the 2019 Tony Award for Best Featured Actress in a Musical for her role as ‘Ado Annie’ in Rodgers and Hammerstein’s Oklahoma! She most recently starred in the Lifetime holiday film, Christmas Ever After. Ali made history as the first actor in a wheelchair to appear on Broadway in Deaf West’s acclaimed 2015 revival of Spring Awakening. She starred in 12 episodes of The Glee Project, winning a guest role on Fox’s Glee. She recurred in the ABC series, Ten Days in the Valley and guest starred on CBS’ Blue Bloods, Freeform’s The Bold Type, Fox’s Lethal Weapon, CBS’ Instinct, The CW’s Charmed, and Comedy Central’s Drunk History. She’s performed her cabaret act at Green Room 42 and soloed at the Kennedy Center in Washington, DC, New York’s Town Hall, Lincoln Center for the Performing Arts and Carnegie Hall. Her mission to improve the lives of others through the arts, disabled or not, is captured in her motto: “Turning Your Limitations Into Your Opportunities.”

Liz Callaway’s masterclass will be held at Lipscomb University on Saturday, May 1 at 12pm Central. Liz Callaway is a Tony nominee and Emmy Award-winning actress, singer and recording artist. She made her Broadway debut in Stephen Sondheim’s Merrily We Roll Along, received a Tony Award nomination for her performance in Baby, and for five years, won acclaim as Grizabella in CATS. She has also starred in the original casts of Miss Saigon, The Three Musketeers, and The Look of Love. Off-Broadway she received a Drama Desk nomination for her performance in The Spitfire Grill (Playwrights Horizons), and also appeared in Brownstone (Roundabout), No Way to Treat a Lady, Marry Me a Little, and Godspell. Other New York appearances include the legendary Follies in Concert at Lincoln Center, A Stephen Sondheim Evening, Fiorello! (Encores!), and Hair in Concert. Regional and international credits include
Dot in Sunday in the Park with George, Eva Peron in Evita, Norma Desmond in Sunset Boulevard, the European premiere of Sondheim on Sondheim at London’s Royal Festival Hall, and most recently, starred in the one-person play Every Brilliant Thing.