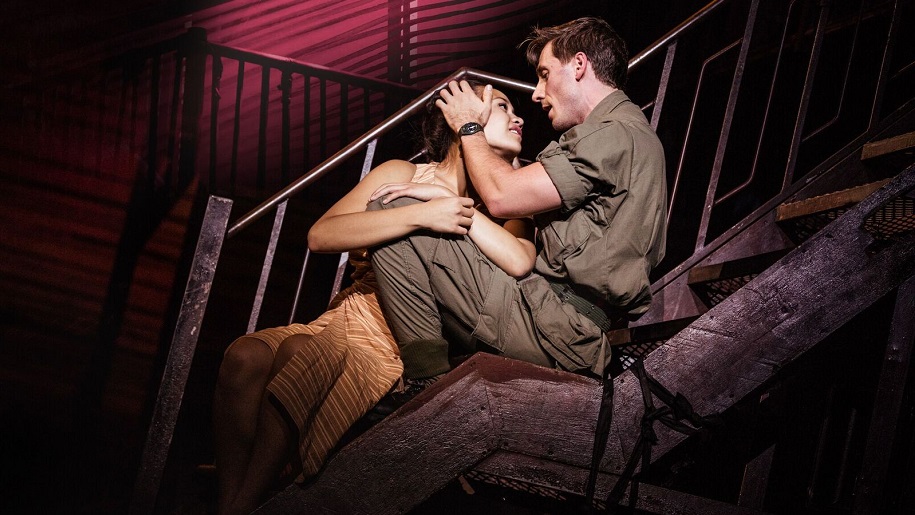 Emily Bautista as ‘Kim’ and Anthony Festa as ‘Chris’ in the North American Tour of Miss Saigon singing “Sun and Moon.”

To understand Jackie Nguyen’s unique connection with Miss Saigon, one need only consult her cast bio in the program – “Dedicated to my family who escaped Vietnam over 30 years ago.”

“The story of ‘Miss Saigon’ is so close to my family’s own story,” says Nguyen, who performs with the ensemble. “My mom was 17 when she met her first husband – an American G.I. – in Saigon, and they had three children. I still don’t know half the stories of what she went through there. It’s still too painful for her to discuss, even after all these years. So, for me to be able to help bring this to life on stage each night is really an incredible honor.”

“‘Miss Saigon’ was the very first musical that I ever saw,” says Nguyen, who was born and raised in California. “It was the first time I had seen Asian actors on stage, which was so important. That was really life-changing for me. I’ve been in many productions over the years, but this is definitely the biggest. It’s such a huge spectacle of a show. And, of course, audiences are always looking for those big iconic moments – they talk about the helicopter and the Cadillac. But along with all those incredible effects, I think they fall in love with the music and the story. At the heart of it all, it’s a story of love, survival and sacrifice. And I think that’s something we can all connect with.”

Nguyen points to the nightmarish helicopter scene – which depicts the fall of Saigon and the evacuation of U.S. forces – as one of the show’s most difficult, yet rewarding moments.

“It’s so exhausting, but also very satisfying because it depicts a real moment in history,” she says. “The spectacle of it all is really quite amazing, with the helicopter hovering over the stage. It looks so chaotic, but it’s all very carefully choreographed. We’re all running, climbing the gates, screaming and crying – it’s incredibly demanding, both physically and emotionally. It’s not easy, but I love it because I feel like it captures that piece of history with truth and authenticity.”

Jinwoo Jung as ‘Thuy,’ Emily Bautista as ‘Kim,’ Sarah Ramirez as ‘Tam’ and the Company in the North American Tour Miss Saigon.

In that quest for authenticity, the creative team enlisted Nguyen – along with fellow ensemble member Matthew Overberg – to serve as Vietnamese language consultants.

“Our director, Laurence Connor, wanted everything to be as specific as possible,” Nguyen says. “He didn’t want to portray a generalization of Asian culture. So Matthew and I have worked very closely with the cast to be sure that everything is true to – and honors – the Vietnamese culture.”

For Overberg, whose parents fled Vietnam and later met in Australia, that commitment to authenticity is vital.

“In today’s climate, we knew we wanted to keep everything as real as possible,” he says. “There are a lot of scenes where cast members need to improvise, so we’ve worked with them on Vietnamese vocabulary and phrases. But we’ve also worked with them on things like body language and the way people would really interact. It adds an extra layer of accuracy to those scenes, which I think is very important.

“It’s such a beautiful show – so lovely and grand,” he adds. “But I also hope audiences are able to step back and really think about the narrative. The show’s themes are still so relevant today. It’s more than just a love story – it’s about the sacrifices people are willing to make for their children and their future. There are so many things happening in the world today in terms of war and immigration. There are so many people fighting just to survive, just to build a life. When Kim sings ‘I’d Give My Life for You,’ that really resonates with me – and with the audience, I think. I think that’s why this show has been running so long.”

Get tickets to Miss Saigon, playing June 4-9 at TPAC.

Amy Stumpfl has been covering Nashville’s arts scene since 2004 – first with The City Paper, and then for The Tennessean. A proud member of the American Theatre Critics Association, she was selected to participate as a Fellow in the Eugene O’Neill Theater Center’s National Critics Institute (2005) and the NEA Arts Journalism Institute in Theater & Musical Theater at the USC Annenberg School for Communication and Journalism (2008).