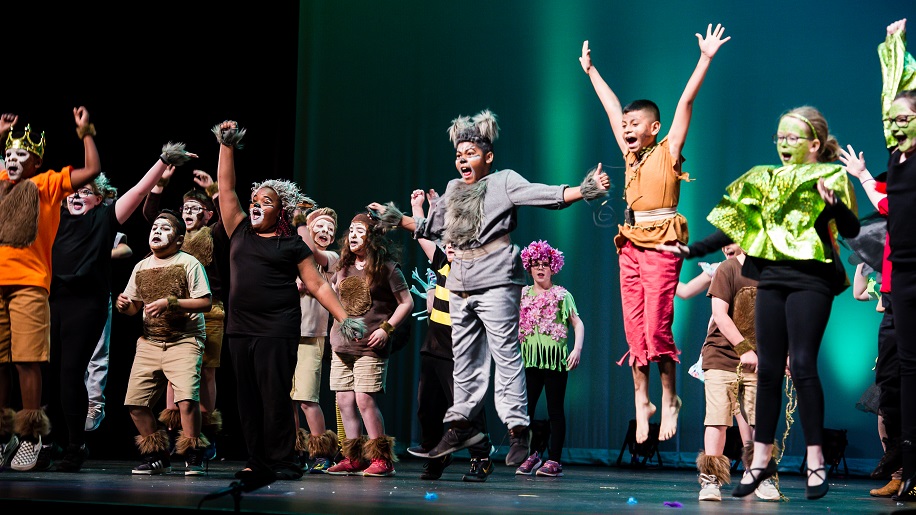 Between the Tennessee Performing Arts Center’s three theaters, there are hundreds of events that take place each year including Broadway shows, comedians, resident company performances, and more. Arguably the most fun (and rewarding) event is Disney Musicals in Schools Student Share Celebration.

Each year, TPAC selects new schools to be admitted to the program. And at the end of the experience, each new school performs for family, friends, and community members on TPAC’s Jackson Hall stage.

TPAC and Metro Nashville Public Schools were selected by Disney Theatrical Group in 2011 to be the pilot program of Disney Musicals in Schools outside of New York City. At no cost to them, participating elementary and middle schools receive a performance license for the Disney KIDS musical of their choice, a comprehensive show kit, and in-school support from TPAC’s education staff and teaching artists.

This year was incredibly special as TPAC welcomed seven new schools into the program, including two from Bedford County, the first rural Tennessee communities to participate outside of Davidson County.

On May 8, students from all seven schools marched into Jackson Hall with costumes and make-up ready to go. The celebration kicked off with a message from Kristin Horsley, TPAC’s Senior Director of Education Outreach. Then, Country Music Association CEO Sarah Trahern spoke about the importance of arts in education and their support of TPAC’s mission. CMA Foundation provides valuable funding and support for Disney Musicals in Schools. This was followed by a performance of Alan Menken’s “It Starts with a Dream” by all students.

The Master of Ceremonies was none other than singer, songwriter, and performer Diana Degarmo who did a wonderful job of motivating and connecting with the students. Diana reminded everyone that both onstage and off, “the show must go on!”

From there, Learning Way Elementary whisked us away to Paris where we met everyone from fancy cats and alley cats to jazz cats with their performance of “Prologue/The Aristocats” from The Aristocats KIDS. The audience was on the edge of their seats from start to finish proving that everyone, indeed, does want to be a cat.

Eakin Elementary brought us back to the jungle to find out what happened when Mowgli met Baloo. Their performance of “The Bare Necessities” was upbeat and full of great choreography. The students had the audience wishing they could stay in the jungle with Baloo too.

Next we got down to business with H. G. Hill Middle and their athletic performance of “I’ll Make a Man Out Of You/Lesson No. 1” from Mulan JR. H. G. Hill came well equipped with swords, rope, and sticks to put on a performance that would make the emperor of China proud.

Amqui Elementary continued the story of Mowgli and Baloo with The Jungle Book KIDS and their performance of “I Wan’na Be Like You.” Although King Louie and the monkeys told Mowgli he wanted to be like them, the audience wished they could be like Amqui Elementary with their killer dance moves that included the Charleston.

Jones Paideia Elementary Magnet had us dazzled from the moment they stepped onstage in their stunning costumes. The cast performed “Friend Like Me” from Aladdin KIDS which included cartwheels, somersaults, back walkovers and more. The students breezed through the choreography as the audience was transported to Agrabah.

The final performance of the morning reminded everyone that friendship and family come first. Eagle View Elementary brought us back to the jungle to wrap up The Jungle Book KIDS with “That’s What Friends Are For.” They may have performed last, but Eagle View still brought the energy of the jungle animals to the stage.

As the morning concluded, the magic continued when Horsley returned to the stage reminding all schools that they will receive a free license to perform another Disney KIDS musical of their choice next year.

Learn more about TPAC’s Disney Musicals in Schools program and how your school can apply here.